With the recent tragedy in Las Vegas, the topic of disaster preparedness becomes a reality at the forefront of our minds. After such a devastating event, students and faculty begin to look at the campus and the potential for disaster.

According to April Wing, the manager of Emergency Management and Business Continuity at CSUSB, our campus could have up to 22,000 students present at a single given time.

Wing expressed that due to our campus’s location and population, we are vulnerable to disaster. She believes that students shouldn’t feel afraid, but instead, feel the need to be prepared in case a disaster should strike.

“We are vulnerable to disasters that students and faculty might not be aware of,” said Wing. “For example, floods, fires, bomb threats, active violence, earthquakes, and more.”

On Oct.19 at 10:19 a.m., there will be a Great California ShakeOut, in which the CSUSB community participates each year to practice how to drop, cover, and hold on. Wing encourages students and faculty to participate in the drill and learn about earthquake safety and procedures.

Wing stresses that it is important to practice emergency procedures because people tend to act as they are trained, and if students and faculty on campus are trained how to react during a campus emergency, then they will most likely use that knowledge during a real disaster.

Cyber Security Professor and primary Amateur Radio presence on campus, Vincent Nestler, is attempting to expand the use of an emergency radio system, Amature Radio (Ham Radio), on campus, which is currently in use worldwide.

Unfamiliar to most students, Ham Radio license holders are present at CSUSB. Dr. Nestler and several students on campus carry these radios with them on a daily basis because the Ham Radio system is in place to contact others around the world, even during a nationwide power outage. 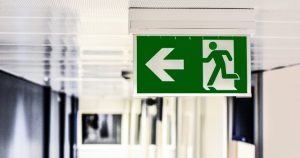 Dr. Nestler explained that anyone can qualify to carry an emergency radio because it is affordable and acquirable.

“In order to become a licensed carrier, all it takes is a short, multiple choice quiz and the purchase of a 20 to 30 dollar radio… that’s it,” Dr. Nestler exclaimed. “Once a person is licensed, they are prepared with this radio for the rest of their life. There really isn’t any loss in trying.”

Wing believes that most students and faculty are not consciously planning ahead for disaster because it seems so far away until it is actually happening.

Locate all near by exits and plan alternate exit routes.

In order for an individual to better prepare one’s self for disaster, Wing suggests that students and faculty visit the Risk Management and Emergency Continuity website on the CSUSB main site and the American Red Cross website for information on how to prepare for and react properly during a disaster.

Wing also recommends that students sign up for crime alerts on the University Police page through the CSUSB main site and to heed all messages from campus during an emergency on or near campus.

Dr. Nestler stressed the importance of disaster preparedness for everyone: “If you haven’t noticed, the world is on fire. When the grid goes down, being prepared, whether through educating yourself or getting your Ham Radio license, can save your life or the life of someone you love.”