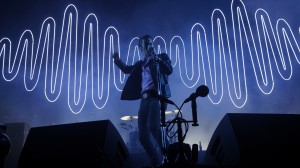 On Thursday night (Aug. 7), Los Angeles was filled with cool kids, dressed mostly in black, who gave off a mysterious aura.

A sea of cars flowed through the streets as they made their way to the Staples Center and that’s when I knew it was going to be one hell of a show.

The show didn’t start until 9:08 p.m. After much anticipation from the audience, the Arctic Monkeys made their way to the stage and the whole crowd went crazy. They cheered, clapped and just lost their mind.

They started the night off with “Do I Wanna Know?”

Alex Turner, lead singer, took out his famous Vox 12-string electric guitar, strumming out beats that hypnotized the audience into a trance.

In the background, an enormous neon sign depicted the prominent sound waves shown in the viewer album, AM. The bright sign alternated with no time to waste between an intense white to a more settle blue.

On most occasions, I prefer to be in the pit rather than to be seated, because I feel that being seated tends to lack energy. However, to my surprise the energy circulated throughout the whole venue. 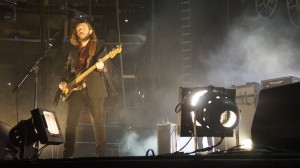 The whole concert was memorable but the part that stood out to me the most was when they were performing “No.1 Party Anthem.” As they performed, the entire audience immediately took out their smartphones, and turned on their flashlight app.

The venue instantly lit up as everyone swayed to the soothing melancholic melody. It was truly a sight to see.

Turner did not lack any energy!

He danced around, thrusting his hips, and drove girls wild with his greased-back hair, electric guitar and sensational voice.

If you have been a fan of Arctic Monkeys for some time, witnessing their new flamboyant performance style was definitely different, but they still kept their well known rock n roll taste, which enamored us all back in 2006.

Though many can agree that their album, AM, was brilliant, from the beat to the out-of-this-world lyrics, it was great to hear some of the older songs such as “Dancing shoes”, “I Bet You Look Good on the Dance Floor”, and “505. 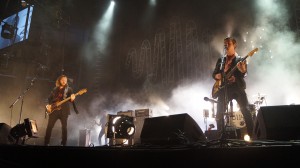