Quintana is a mass media studies major interested in the television and video production field.

Quintana is the first in his family to receive a bachelor’s degree. His younger brother Robert is graduating from Moreno Valley College this June as well.

“Me and my younger Robert will be graduating in the same year. It’s very special to us [my family], because it’s probably never going to happen again,” said Quintana.

“I want to say it’s been surreal, mostly because I remember coming here, [and] I didn’t know anybody. And then I started to open myself up to people here and they’ve been so gracious and welcoming,” said Andy Quintana.

After graduating, Quintana plans to “cast his reel” for work in the Los Angeles area for various network stations.

Ideally, however, Quintana would like to create, develop and produce his own projects and programs.

“I want to produce, direct, write, and edit my own shows or programs,” said Quintana.

Quintana worked as a video lab assistant in the CSUSB video lab for media specialist, Michael Wichman, whom he humbly refers to as his “second parent.”

“Looking back at the seven years at my college life accumulating to this point. I didn’t think I would be here, with a job, an internship – it’s overwhelming, it’s humbling,” said Quintana.

“[With school] there used to be a safety net, I think I’m ready to not have it anymore. I’m ready for the uncertainty, I’ve outgrown worrying about the future,” continued Quintana.

Quintana envisions positive plans and achievements for his life and encourages future graduates to do the same.

“Try not to control everything, try not to live rigidly – live flexibly. Never feel [bad] that things don’t happen or do happen. Life has a way of working things out for you,” said Quintana. 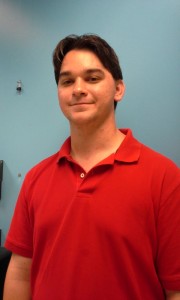 “[This] is one small goal to a long term goal. I’m not worried, I don’t have any fears. It’s about 30-40 years from now being a good writer,” said Dominick Dicus.

Dicus was a marketing major but became an English major after being inspired by emeritus English professor Philip Page’s reciting of “The Love Song of J. Alfred Prufrock” by T.S. Eliot in his English 101 course.

“[It was] such a moving experience, he was so passionate about what he wanted to do,” said Dicus.

“Juan Delgado is a reputable poet in his own right. He has been very beneficial. He encouraged me to do fiction,” said Dicus.

Dicus is pursuing the creative writing track in English, with plans of becoming a published fiction writer.

He is dual minoring in screenwriting and film studies, and has also applied to be in the Master of Fine Arts (MFA) creative writing program in the fall.

“For me, it’s about the long term. [Schooling] allowed me to cultivate and focus on my experience in writing,” said Dicus.

“My job as an artist is to manifest my beliefs in a way that encourages people […] I think every artist has the ability to think greatly before they communicate any work,” added Dicus.

Dicus is not the only member of his family to graduate from CSUSB. His mother and his three siblings have all attended this campus.

He mentioned that his family has always believed in the importance of education and that they’re happy he’s graduating.

“Don’t pursue responsibility so much that you don’t do what you love. When you find the balance between the two, that’s when you do something good for society,” said Dicus. 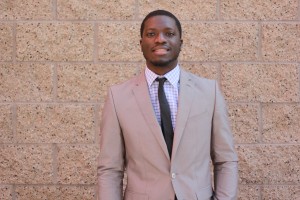 “I was a science major, I didn’t know what to do – I was struggling a lot. I switched my major to something I wanted to do, so I switched to mass comm,” said Inno Sita.

Before attending CSUSB, Sita’s original choice was San Diego State in pursuit of becoming a pharmacist like his father.

Unfortunately, he was denied due to overcrowding and Sita began searching and applying for other schools to attend, including CSUSB.

“I got accepted to Indiana State, so I packed all of my belongings in my car and drove to the Midwest. I stayed for two weeks, and then I found out I got accepted to San Bernardino,” said Sita.

Upon receiving acceptance, Sita made his trek from the Midwest back to sunny Southern California.

Sita plans on working in the television and video production field as a filmmaker, director, and screenwriter.

“I started [filming] when my uncle gave me his camera to use. I filmed my aunt who came from Canada. By the time she left, I edited. I felt the connection with filming and editing,” said Sita.

Ever since, Sita created his own production (Inno Sita Productions) and has produced various short films, including his very first short “Interested,” which was shot here on campus.

“With my production, I’m trying to bring it back home from where I’m from, Kinshasa, Democratic Republic of Congo. We don’t have HD channels, short films, or interesting shows for kids,” said Sita.

Sita’s plans for after graduation include: searching for work in the Los Angeles area, involving himself in various video production projects, as well as working on his web series “Bill and Steph.”

“Be aware of what’s around you. Everything is here, we just don’t use it. Use what the school’s provided for you. Once you’re done, you can’t rely on school,” said Sita.

Who is responsible for underemployment?
First comes college, then comes marriage?
Unemployment in Youth