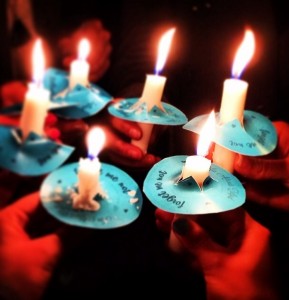 A 5K Glow Run was held Friday at CSUSB in honor and support of Alpha Phi’s Nia Telford who battled stage four cancer.
On that rainy Friday, over 500 people gathered at 6 p.m. in the lower commons.
Friends, family, community members and even students from other universities showed their support by attending the run.
“The run was a celebration of Nia’s life,” said Dakota Ruiz, Alpha Phi president.
It was put on by two Greek councils, Panhellenic Council (PHC) and Interfraternity Council (IFC).
The Glow Run raised up to $2,600 and proceeds were designated to the Telford family.
Ashley Mendez, a Kappa Delta Sorority member, made it out to the run that night.
“It was really inspiring how so many people got together and still ran in the rain, even those who didn’t know Nia personally,” said Mendez. “It was a touching experience.”
Every runner was provided with a white T-shirt, glow sticks and paint. The paint was used to decorate the white T-shirts.
Some runners decorated their T-shirts with hearts and the initials “N.T.” inside of them and other phrases that were in Nia’s memory.
Zeta Tau Alpha’s Mylesha Davis is the activities director of PHC and helped coordinate the run.
“It was a bit stressful having to plan this event because of the weather prognostics, but we made it happen, rain or shine,” said Davis.
The run was originally planned to help the Telford family with Nia’s medical bills but a few days before the run Nia lost her battle to cancer.
The CSUSB Greek community was shaken up by Nia’s death but was united stronger than ever.
A few days after the Glow Run, Student Leadership and Development and Alpha Delta Phi Sorority planned a candle lighting for Nia that Monday night.
Candles were passed out to all the students, alumni and close friends of Nia who came to the memorial.
It was an emotional night of prayers and songs.
Onassis Lopez a member of the Delta Sigma Phi Fraternity was a close friend of Nia’s.
He described her to be one of the happiest girls he has ever met.
“Nia was always extremely positive. If I was ever feeling down, she would try to cheer me up in any way possible,” said Lopez.
Nia’s sorority sisters considered her fun, sassy and a fighter.
Telford was in the first quarter of her second year in sorority Alphi Phi when she found out she had cancer.
Even after being diagnosed with cancer, Nia remained positive.“At first, it was really difficult to understand that she was terminally ill because she was still the same ol’ happy Nia,” said Edgar Zepeda, another of Nia’s close friends.
Nia will forever remain in the hearts of those who loved her dearly and will never be forgotten.