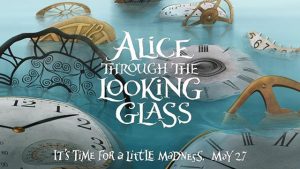 Director James Bobin challenged himself upon making the sequel “Alice Through the Looking Glass.”

The movie is exciting and entertaining to say the least.

Author Lewis Carroll brought these wonderful characters “alive” in his beloved stories, trying to live up to such a successful story is not always easy.

Bobin did well with this sequel keeping the madness alive and did a commendable job of making sure that “Through the Looking Glass” kept the “wonder” we came to love from the first film.

The same original cast was used besides a new character played by Sacha Baron Cohen known as “Time.”

Time had a long and significant role in the movie and kept the quirkiness needed throughout the film.

I enjoyed the movie predominately because the great use of costumes and makeup.

The Mad Hatter’s makeup was impressive having two different colored contacts in.

Bright, colorful costumes were used for Alice and the Mad Hatter giving the movie more credibility following the costumes and makeup we seen in the first film.

The effects were something else that grabbed and pulled me in and the added digital effects really helped pull the film together.

One scene in particular was where Alice was riding around in the Chronosphere.

I felt like I was right there in the Chronosphere with her as she is traveling through time and the effects of this scene were really striking.

Alice is found riding through the ocean waves and you see each point in time showing up in the waves as she drives by, it made me think about how impressive it would have been to see it in 3D.

The movie’s plot is based off of a situation for the Mad Hatter that makes him depressed and not his usual self. He is the main reason behind Alice’s return back to Wonderland.

You do not see much of the Mad Hatter during the movie, and I feel like that could have been improved especially since he one of the main reasons behind the plot.

On a positive note, I did enjoy the use of quirky, zany and wacky sights that we came to love in the first movie.

All of the characters did an excellent job just as they did in the first movie.

Johnny Depp is a personal favorite and I feel like he fits the character of the Mad Hatter so well.

Without giving out too many details, I would like to disclose something about sisters Iracebeth and Mirana.

You find out about how Iracebeth’s head became shaped the way it is. I actually never wondered about it.

If you have wondered why it is and you have yet to see the movie, your question will finally be answered in this sequel.

The sequel made me laugh, kept me engaged and kept me wondering, just like a movie should make you feel.

However, if you are a critic at heart and have a lot of opinions, you could probably wait until the movie comes out on Redbox.