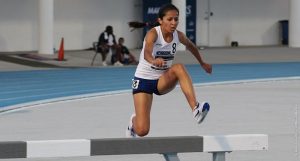 The event took place at the IMG Academy in Bradenton, Florida.

“I was a little bit nervous but it’s normal,” said Aceves, “it was new ground for me, a new environment.”

Earlier in the season, Aceves struggled through various medical problems that prevented her from being able to race.

“I was happy that I made it to Nationals considering two months ago I was considering red-shirting,” said Aceves.

An athlete can only compete for four seasons in a sport. When they are unable to compete for any reason, they are allowed to red-shirt a season.

The red-shirt saves their season until they can compete again.

As soon as Aceves was able to compete, she came back stronger than ever.

“I knew that I could improve and secure my spot for nationals,” said Aceves.

“I liked it because since it was just me I was more focused on myself,” said Aceves.

Although she enjoyed focusing on her own training, Aceves missed her team running with her.

“It’s easier when your teammates are there, supporting each other, it makes a difference,” said Aceves.

According to Aceves, she prepared for her race by staying clam, warming up and doing her normal drills she does every day.

“The strategy, just stay with the lead group, just like keep up with them,” said Aceves.

Aceves raced against some of the fastest Division II steeplechasers in the nation. Prelims was split into two heats, Aceves was in the second heat.

“They were tough. They went out fast from the beginning, I didn’t expect that,” said Aceves.

Aceves worked hard to run with the top pack in sight and make it to finals.

“I was trying my best to keep up with them, but with three laps to go I lost contact,” explained Aceves.

“I was happy because I did my best, but at the same time I was disappointed that I didn’t make it to finals,” said Aceves.

Aceves had an amazing season and learned a lot from her time competing in Florida.

“Now I know what it feels like to make it to Nationals and what the competition is like,” said Aceves.

“I will train even harder for next year,” continued Aceves.

Not many athletes have the strength to come back mentally and physically strong after taking time off.

Of all the athletes that do, even fewer make it to Nationals in their first competition back.

Aceves seems to be one of those strong athletes who will hurdle the barriers in her way both on the track and in her life.

“My motivation is to push my limits, to reach my full potential, because I know I haven’t gotten there yet,” said Aceves.