Bright and early on Jan.19, I joined 200,000 people in Los Angeles to participate in the third annual Women’s March. Crowds of people took over the streets to chant, sing and show their solidarity with one another.

As a self-proclaimed feminist, when the Women’s March was first introduced, I was ecstatic to attend. Now, it is something my friends and I anticipate going to every January. As someone who’s been to the march for all three years, I can definitely say this year was very different.

The first two marches had a theme. In 2017, fresh off of Trump’s inauguration, most signs, chants, and speeches given were in reaction to the new presidency, while the 2018 march was heavily focused on the #MeToo movement that took Hollywood by storm.

Education was a big topic this year, mostly because of the LAUSD teacher strike that was going on. Many people had signs showing their solidarity with the teachers.

Elizabeth Tovar, 21, was passionate about this topic because her father is a high school teacher.

“Education has to be one of the most important issues currently,” Tovar said. “These people are shaping our children. Why are they treated like they don’t matter?”

There were many speeches given, including ones from a Black Lives Matter organization, pop star Lauren Jauregui and Gov. Gavin Newsom.

Newsom expressed the importance of this event.

“We don’t just walk, we act,” Newsom said. “Women’s rights are something you can never take away.”

There were also several booths to check out, such as Planned Parenthood, which has a strong presence at these marches every year. But one booth that stood out this year was from Sprite. This booth seemed to be the most popular because people could share their stories and reasons behind their participation on sticky notes, which they could stick on the wall.

The thoughts that were shared on these sticky notes were diverse.“I march for safety in schools, streets, and workplaces for trans-POC,” one of the participants wrote on her sticky note.

Other participants wrote, “I march for those that don’t share the same privilege.”

Stella Monroe, 16, Kait Wilson, 15, and Quinnalan Reynolds, 15, were all first-time attendees of the march this year. After convincing their parents to let them come, the girls hopped on the Metro train and were anxious yet excited to experience the event.

“The president has made it very clear that he is a misogynist and I think it’s more important now than ever to show him that we’re not just going to be quiet,” Monroe said.

“We came to support women who have overcome all kinds of adversities,” said Wilson. “And this goes for anyone who identifies as a woman, not just the cisgender.

Year after year, thousands of people keep coming out to march together, with the feeling of being united and relating to one another being something that brings people back. 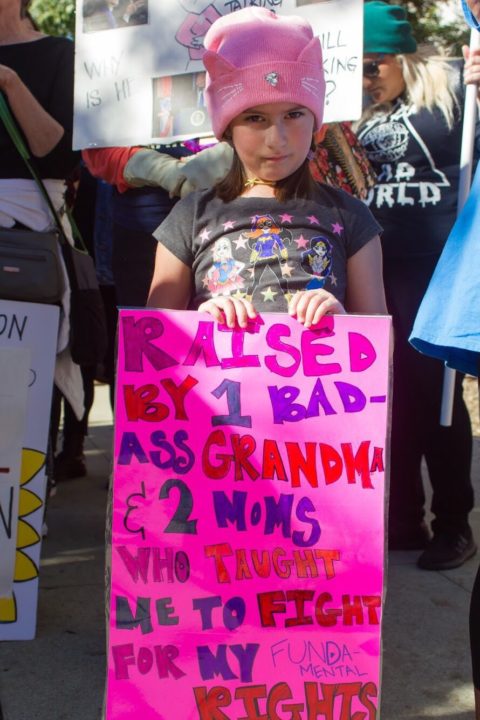 Women of all ages came out to stand together and not be silenced.

Martha Zawinul, 44, said, “I march to support all women, to show that I matter, I cannot be hidden and I demand to be seen.”

Check out the latest issue of The Chronicle

Check out the digital versions of our past issues on issuu.com

By Emina Preciado and LaShane Overstreet We’ve all seen one too many bad Yelp reviews mentioning horror stories from a restaurant; or the gut wrenching feeling of your favorite sushi spot getting slapped … END_OF_DOCUMENT_TOKEN_TO_BE_REPLACED

By: Ashley Flores, Joshua Clement, and Brittany Fugate The fight for equality persists to this day; however, it should have been implemented decades ago. While the disparity between wage gaps in regards to … END_OF_DOCUMENT_TOKEN_TO_BE_REPLACED