This month, the CSUSB Title IX and Gender Equity is presenting a series of events to promote Sexual Assault Awareness Month (SAAM). Whether it is wearing the official SAAM color teal, or sporting the symbolic ribbons, coyotes can show support through the activities planned for April. The occasion began Apr. 2-5 when CSUSB VOICE peers displayed a resource table near the west entrance of the Santos Manuel Student Union. SAAM ribbons were passed out to students, and representatives of Title IX and Gender Equity were there to discuss the meaning of consent. During the same time, an Instagram campaign called #TEALMEYOURSTORY was launched so supporters could upload pictures of themselves … END_OF_DOCUMENT_TOKEN_TO_BE_REPLACED 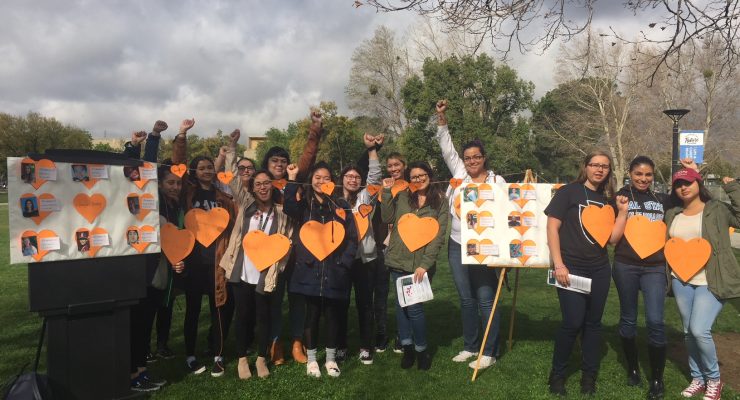 As schools across the nation participated in National Walkout Day to protest mass shootings and promote the enforcement of stricter gun control laws, the CSUSB VOICE peers held their own walkout on the Pfau Library Lawn on March 14. This event came one month after the deadly Marjory Stoneman Douglas High School shooting in Parkland, Florida, which claimed 17 victims. The #Enough and #NeverAgain movements have inspired a call to action against gun violence, and as a means to honor the lives lost during the Valentine's Day massacre. While high schools nationwide had 17-minute walkouts to represent each life lost during the Florida shooting, the CSUSB walkout was slightly … END_OF_DOCUMENT_TOKEN_TO_BE_REPLACED