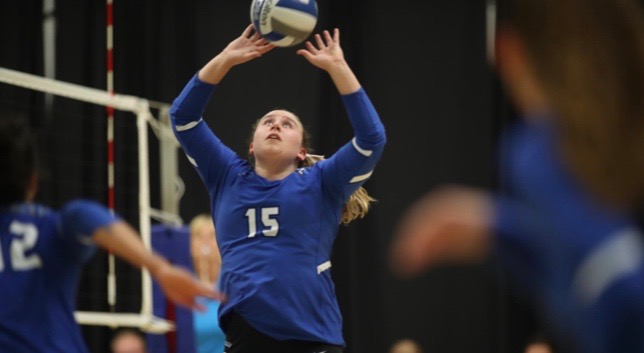 Being a student athlete comes with a lot from practices, classes, and putting in extra work. However, the most important aspect is the daily nutrition of athletes. Survey results show that it is hard for some athletes to maintain the proper nutrition. At CSUSB, a large number of athletes eat at the cafe on campus, but they don’t seem to be picking the healthiest options. It is important for athletes to eat so their performance on the field or court can be optimal. The survey shows that more than 55% believe their diet has an impact on their performance. The way in which you eat as a student athlete can help take your performance to the next level or hold you back from reaching your … END_OF_DOCUMENT_TOKEN_TO_BE_REPLACED

By Jasmine Gonzales |Staff Writer| CSUSB women’s volleyball team is still in the running for the Conference Championships after defeating Cal State Monterey Bay Otters on Oct.15, and the Cal State East Bay Pioneers on Oct. 18. Coyotes fought hard against the Otters, winning 3-0 in the Coussoulis Arena. The Otters put up a strong fight in the first match, only trailing the Coyotes by one, but eventually fell short after allowing two aces, ending the match at 28-26, with the Coyotes on top. The Coyotes went into the game strong, “we have a high confidence level based on past results,” said Head Coach Kim Cherniss. In the second match, the Coyotes showed great teamwork, being in sync … END_OF_DOCUMENT_TOKEN_TO_BE_REPLACED

By: Luis Petty |Staff Writer| Women’s Mixed Martial Arts (MMA) has long struggled to become recognized and legitimized by the Ultimate Fighting Championship (UFC). Womens’s MMA was given a division in the UFC last year, and now the possibility of a fight between two renowned women may "make a mockery of the sport," according to former UFC title challenger Miesha Tate. President of UFC, Dana White said to UFC Tonight that he would give Gina Carano an immediate shot at the title last month on April 9 and confirmed that Carano will be fighting Ronda Rousey for the championship title in UFC 175. “I really feel that it’s just kind of a joke” stated Tate in an interview with … END_OF_DOCUMENT_TOKEN_TO_BE_REPLACED

By Luis Petty |Staff Writer| CSUSB Student Recreation and Fitness Center (Rec Center) provides the perfect opportunity for students to try rock climbing as an alternative exercise. Rock climbing is a sport unlike any other in that it provides students a new outlet in their workout routine and an opportunity to experience something new. The rock wall is equipped with a 34-foot wall and managed by experienced staff and faculty. The knowledgeable staff will guide students through the basics of safety and climbing rules in order to provide a safe climbing experience. The Rec Center’s rock wall requires climbers to be physically and mentally versatile for each section of the … END_OF_DOCUMENT_TOKEN_TO_BE_REPLACED