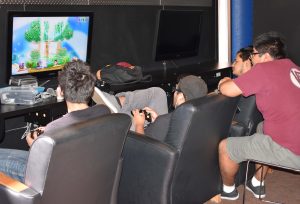 For every Super Smash Bros. Tournament, the tournament organizer announces when they are doing sign-ups. Whoever wishes to participate can sign-up with their name, nickname, or alias.

Once everyone is entered, a bracket is created, and within that bracket, it shows which gamers are competing against each other. Whoever wins, goes onto the next bracket and so on. In the end, it goes down to the grand finals, where the winner is announced.

Japanese game developer Masahiro Sakurai introduced Super Smash Bros. in 1999 for the Nintendo 64. It was then released worldwide after selling over a million copies in Japan.

“I really grew up on the game itself when I was younger. I would play casually with my brothers and my sisters,” stated Jimenez. “As I grew up, I grew to find a community that plays this competitively and the beginning of my freshman year in college is when I first started really getting involved.”

In Super Smash Bros, up to four players can play in multiplayer mode and choose some of Nintendo’s most recognizable characters.

“What is cool about this game is that you can pick any character you want and you have a chance to win. It really goes down to how you play the character,” said Jimenez.

The popularity of the franchise is due to its variety of playable characters such as Mario, Fox, Link, Kirby, Samus, Pikachu, and more.

Henry Herrera, a student participant who goes by the alias “Shuckle,” said his go-to character is Samus.

“She’s been my character since I was little because that was one of the first video games that I played where she was from called Metroid. She’s not really considered a good character in this game, but I try my best to show she can be good to have in competition,” explained Herrera.

To knock out an opponent, the player must knock that character outside the arena’s boundaries in any direction. The winner is the last fighter standing once all other fighters are eliminated or if a time limit is applied to the match, the fighter with the most lives remaining once time runs out.

CSUSB student and participant Ronald Torres stated, “I attended this event because I fell in love with the game. It helped me a lot with my school life because it kept me from stressing out about my classes. It also helped me to find new friends because, without this game, I would not have the friends that I have right now.”

Those who missed this event can always sign-up for the next tournament online at the CSUSB Gamers Lounge website.

Make sure to bring your A-Game to smash your opponents with some friendly competition.

”Our community is one of the friendliest communities you’ll ever see when it comes to video games. We are all here having a good time playing in a bunch of tournaments. If anyone does come by, we’ll welcome them,” said CSUSB student and former player Erick Jimenez.