Students are urged to be more careful about the safekeeping of their belongings.

Apolo Ibanez, a biology major, attended Coyote Fest in 2019. Apolo had a good time at the fest, but then he realized he had lost his phone. The first thing he did was ask his friends to help him track it.

“I didn’t know what else to do after I tried tracking it, I didn’t see any cameras on the field that could have helped me find my phone,” said Ibanez.

Ibanez could not find his phone. He thinks it is possible that the sim card was taken out to avoid the phone being traced.

According to Detective Higgins, there are cameras throughout the campus on the blue phones.

“We have them on buildings, in different places. We can even set up cameras under specific kinds of details and stuff,” said Higgins. “It’s sporadic throughout the campus and throughout every building, so it’s hard to say where they’re at exactly.”

Not all students are aware of the cameras and how they can use them to locate their items.

One late night, Robert Cisneros went studying at the Wedge. On that night, he brought his airpods. However, when he left, he did not have them. After realizing this while driving home, he came back to find out that his airpods were gone. He didn’t know proper protocols to take with a smaller theft. He accepted his airpods were stolen and left that night without them.

“I asked around when I came back and looked like crazy. Nobody saw anything, so I gave up and left,” said Cisneros.

While thefts inside the campus buildings have occurred, Higgins stated that thefts are most likely to take place in the parking lots.

“There are people that park their vehicles and leave them unattended with visible items. Then, at some point, if the car is unlocked and others are able to get in the car, they’ll take those items,” Higgins explained.

Despite these reported incidents of thefts, these types of crimes don’t happen regularly.

“They don’t occur that often,” Higgins said. “Every once in a while. Over the last two or three months, I think I’ve had about four or five of them.”

Although they don’t occur as often, personal items should still be kept safe. Some guidelines to prevent campus thefts are to read the campus alert emails, park in safer places, keep the valuable property in cars hidden, try your best to be in well-lit areas and be over cautious with your personal property.

Take a listen to the interview with Detective Higgins: 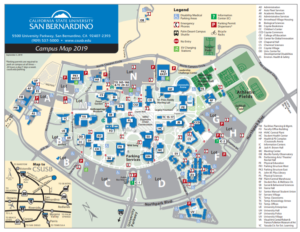