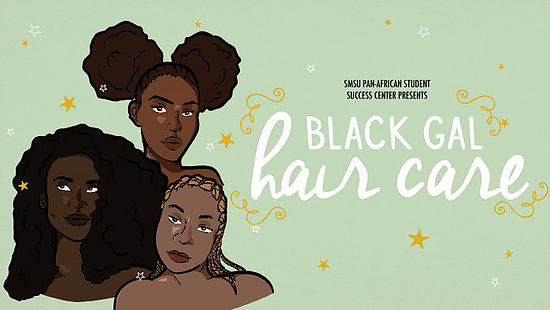 It’s no secret that many black women, such as Toyin Akinremi, spend much of their hard-earned money on maintaining their hair.

Toyin Akinremi, a fifth-year student at Cal State San Bernardino, hosted an event where a young black woman came together to share tips on how to take care and manage natural hair.

Being that this was Akinremi’s first year throwing a Black Gal Hair Care event like this on campus, she wanted to teach women of color how to not only care for their hair but learn to love their natural hair as well.

Her purpose was to show black girls that they are not alone when it comes to loving and caring for their naturally curly hair.

The event was held at The Bay in the Santos Manuel Student Union on January 11th.

Majority of black woman all have the same similar conflicts when it comes to their hair such as moisturizing, growing, or maintaining it.

“Coming into this event, I had no knowledge of black hair,” Akinremi said. “I actually had to put in the time, brainstorm, and study the background of natural black hair care.”

It took Akinremi the mid-session of the fall quarter to organize this Black Gal Hair Care event, not including the holiday break the school had returned from.

She had wished she could’ve advertised the event better and got the word out more by promoting it on social media or putting more flyers out around on campus.

The venue played soul music in the background as guests snacked on cupcakes and cookies that were provided.

The beginning of the event consisted of Akinremi passing out raffle tickets to every guest that had attended but didn’t yet share what it was for.

To get the discussion started, she starts off the event with a short youtube video about the history of black hair.

The video consumed of pictures of black women with various hairstyles from the 1860s to present day.

It showed hairstyles such as twists outs, cornrows, and Bantu knots, which has been known to be around for centuries.

Where to as chemical relaxing perms and extensions started to occur around the 1990s to the 2000s.

A cosmetologist by the name of Angela Lashay spoke on wigs, weaves, extensions and also answered questions about hair care.

Such as how often should one condition their natural hair and what kind of products are good when it comes to moisturizing.

Lashay shared how she has had clients that have attended Cal State San Bernardino, graduated, and the wigs that she had created for them had lasted them for years.

“As long as a person gives the proper maintenance towards their hair, it should last them forever,” Lashay shares as she partakes to ask questions in the crowd.

Akinremi then showed another Youtube video that explained the different hair types of natural African hair.

She also showed a video about the proper technique of shampooing and conditioning your natural hair.

Because black hair can be so coarse, it can be very hard to clean correctly and get all the right spots. Not only is it important to wash natural black hair, but it is also very important to condition and moisturize it as well.

A majority of this event was just short brief youtube videos about the styles and maintenance when it comes to black girl hair.

There was an intermission during this event where people were able to grab snacks and participate in a raffle to win a gift bag full of Shea Moisture hair products.

Chidiuto Treasure Agbakwuru, a second-year student at Cal State of San Bernardino, had attended the following event is hoping for a free gift bag of products.

“I enjoyed this event because of the fact that it teaches women of color about the knowledge of their natural hair,” said Agbakwuru.

She also shared how informative the cosmetologist was and even though she wasn’t able to leave the event with any Shea Moisture products, she’s content with the knowledge she had gained from the event that evening.

The third-year at CSUSB as well that goes by the name Destiny Goodwin understood that not every hair product works with all hair types and due to that, it’s good to get information on what should or shouldn’t be used.

“I came into this event very open minded and ended up learning a lot,” Goodwin said. “It was very eye-opening learning about the different hair types and textures of African women.”

Towards the end of the event, Akinremi discussed on “Why do you love your hair?” and “What do you struggle with your hair?”

Multiple women had shared their struggles and their personal thoughts on their natural hair.

One participant by the name Tamika Johnson, who is a second year at CSUSB, explained the love for her curl pattern and likes the fact that it has different curl patterns and not just one specific pattern.

“I love my hair because I think it’s very unique,” said Johnson. “I like how my hair isn’t just one curl pattern and I feel I could do certain stuff to my hair that I probably wouldn’t be able to do if it was naturally straight.”

Another student, fifth year, Mia Johnson, also shared how she is in the process of learning how to take care of her hair.

“I’m currently learning how to take care of it and I love it when it grows,” Johnson said. “I feel it is a process for me, but I’m still learning to love my hair to its fullest potential.”

Akinremi gives some good tips and suggestions about solving those conflicts.

She even shares some personal experience she had struggled with her own hair in the past.

“My goal for tonight was for everybody that leaves this event, to apply the knowledge of what they learned about black girl hair to their everyday lives.”