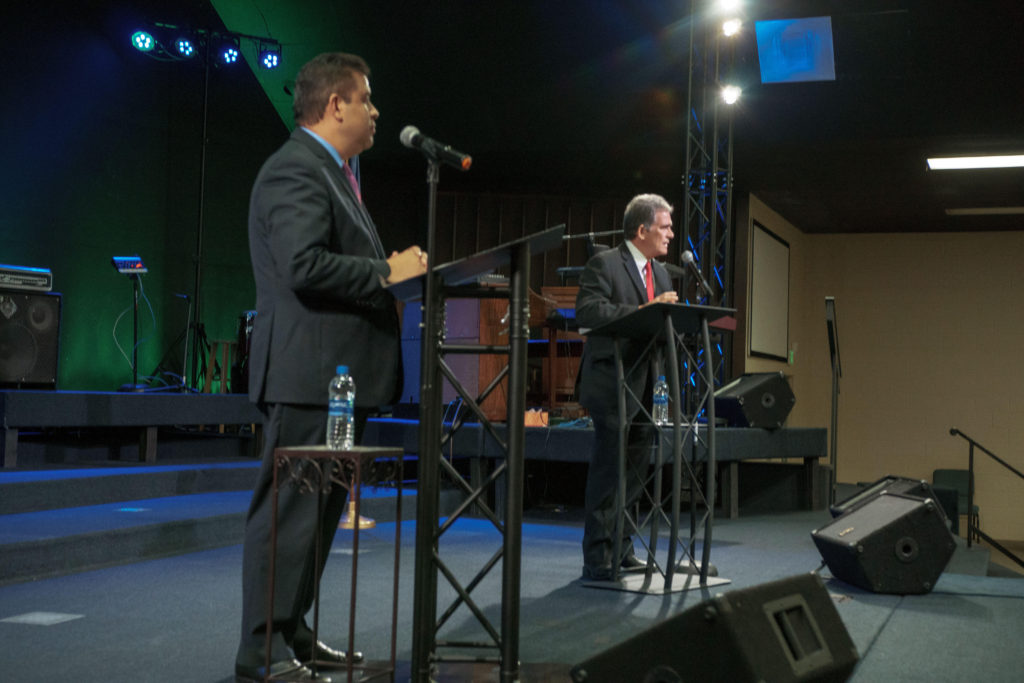 Mayor Davis responded to the public’s questions with his current plans of action which are already in place, while Valdivia promised that he would fix the city’s problems faster and more effectively than Davis has.

The running theme of Valdivia’s answers was that the city is in need of real leadership, which he can provide. He said that the council he sits on is the one that makes all of the tough decisions.

Davis responded to this with a list of controversial votes which Valdivia abstained from in City Hall, stating that he does not have the ability to make the tough decisions he claims to.

Both candidates seem to agree about many issues, like the homelessness problem causing major issues for the city’s economy. Mayor Davis claimed that the homeless population costs the city 30 million per year, not including the amount of revenue lost from the effects of panhandlers congregating outside of local businesses.

Both candidates agree that an increased police force is necessary, but where they disagree is on the city’s jail. While Valdivia believes it’d be best to allocate more funding to the jail in order to hold lower offense criminals. Davis, on the other hand, claims it would take funding away from the number of police officers on patrol which needs to grow, not shrink.

Jesse Carrillo, citizen of the month in January 2017, is a San Bernardino business consultant who supports Mayor Davis. Carrillo worked with Mayor Davis on the Quality of Life team which focuses on remedying issues of panhandling, homeless camps, and litter.

“We do these policies to reduce the use of things that attract transients,” said Carrillo. “We can’t arrest our way out of a homeless situation.”

The sparks started to fly during the conversation of the newly legalized marijuana dispensaries. Valdivia, who voted against marijuana’s legalization, said that since marijuana is now legal, we must do what we can to shut down illegal dispensaries and keep marijuana away from schools and churches. Mayor Davis responded by calling hypocrisy on Valdivia for accepting donations from those illegal dispensaries he said he was interested in shutting down. When asked if he wanted to respond, Valdivia declined and asked to move forward with other questions.

Mayor Davis proudly touts the fact that since he became mayor in 2013 he has taken the 45 million deficit the city was in and raised it to a 30 million dollar surplus.

“I hear all this talk about this surplus, but nothing about what is being done to keep that surplus growing,” said Pagan. “What are you doing to replenish this surplus?” 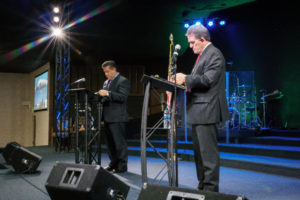 Valdivia criticized Davis for not using funds to fix the city’s crumbling infrastructure or the downtown area, including the Carousel Mall. He said that a lot of promises were made and under him those promises would be kept.

Mayor Davis responded to Valdivia by describing the slow process of getting the city out of bankruptcy and how the economy he inherited did not allow for the expenses necessary for such renovations. He said that the redevelopment of Downtown San Bernardino is happening, but it had to be possible first.

Valdivia said he would use 18 million of the 30 million dollar surplus on fixing the city’s infrastructure. Davis responded with saying that the surplus needs to remain stable so it can be dipped into as needed on a long term basis.

When asked about how to stimulate the success of disenfranchised races, Davis discussed how the issue would not be easily resolved, but he believes the answer to that problem lies in the education system. Valdivia stated that the city has been run by “Country Club Mayors” for 13 years and that the city is in need of a leader who has been through the same economic struggles.

San Bernardino residents will decide who to vote to elect between the two opposing candidates on Nov. 6th.