Feelings alone do not make a change in the world claimed Dr. Hatem Bazian at the lecture on campus. Data influences policy, and that is why he believes it is important to speak up against hate and injustices that we witness day to day.

The center for Islamic and Middle Eastern Studies hosted a panel discussion on the relationship between Populism and Islamophobia. 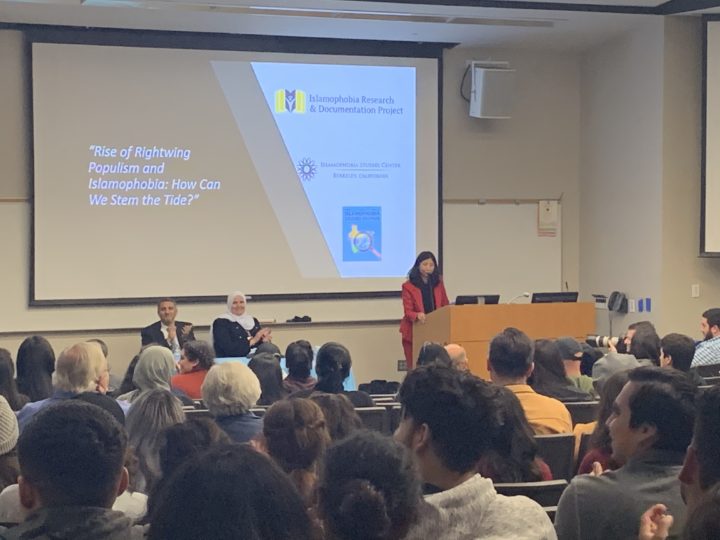 Guest speaker Dr. Hatem Bazian is the professor of Asian American and Asian Diaspora studies and Director of the Islamophobia Studies center at UC Berkeley. The panel was facilitated by Dr. Ahlam Muhtaseb, a professor of Communication Studies at CSUSB and the director of the center for Islamic and Middle Eastern Studies.

Dr. Bazian opened with a quote from Dr. Martin Luther King from a speech during the time he began to oppose the Vietnam War. Connections were made through the powerful words or the past and how the message pertains to us today regarding the three evils of society, racism, materialism and militarism. He said that what we need to engage in specifically is to speak on things because it’s the right thing to do.

There was a performance by Hannah Doueiri during the brief intermission between Dr. Bazian and Dr. Muhtaseb’s presentations.

Hannah’s ten-minute monologue touched on the origination of Irish dancing and the reason behind why their dancing style utilizes only the Morton half of the body all the way to the ugly face of prejudice.  She spoke on how such hatred is not innate people are taught to hate and we as people need to break this terrible cycle.

Dr. Ahlam Muhtaseb started her part of the presentation on Islamophobia and entertainment media, by deconstructing the latest episode of Law and Order: Special Victims Unit. The episode titled, “Assumptions” raised a lot of uproar especially amongst the Muslim community because it was accused of several Islamophobic tropes. She wanted to bring attention to this show to bring to light how media is used as a pedagogy.

“I think it’s crazy how we don’t ever second-guess what we see in movies or on TV,” said Matthew Rodriguez, a CSUSB Senior at the event. “Today opened my eyes to not see media just at face value.”

Dr. Muhtaseb explained how media is a way of learning, understanding, and consuming the world. She explained it is important to acknowledge this because media becomes the lense in which we see the world, cultures, races, and other ways of life. Therefore, if the media is not giving an accurate representation, then it becomes a misperceived source of culture learning, according to Dr. Muhtaseb.

The event concluded after a questions and answers panel with Dr. Ahlam Muhtaseb and Dr. Bazian.

The story was prepared by Airamee Gründer and Merari Palacios in the newspaper practicum class COMM234A.