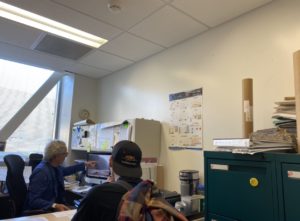 Professor Joan Fryxell is a Geology professor at CSUSB who has witnessed the damage that has been caused by the high winds. Today, she talks to us about why we are having them and the effects they have on everyone.

A: What causes strong winds is the difference in air pressure. If you have really high pressure in one place and lower pressure in another, the air is going to equalize pressures. Air will not make the high pressure higher, it will flow from high pressure to low pressure. That’s what generates wind regionally. The bigger the difference the stronger the flow, so the harder wind will blow. There’s also the issue of daytime heating.  Sunlight hits the ground, the ground heats up, which heats the air, hot air rises and so you’ll often get air currents forming during the day. Those can be more local effects depending on how hot the ground gets, and whether it’s a clear day or not. When different air masses interact, we get more regional effects. Weather systems typically move eastward in this belt of latitude, which is largely related to the rotation of the planet.

Q: Why do you think we are having strong winds here in SB?

A:  The really strong winds this last month were high-pressure systems that were north and northeast of us. The reason that we got very strong winds here on campus is because north of us are the San Bernardino Mountains and the San Gabriel Mountains and in between them is the Cajon Pass. The pass funnels wind. It focuses wind in the same way that an open garden hose will pour water, but if you constrict the end with your thumb, the water speeds up a lot. The mountains block the wind at either side which funnels the air, making it speed it up to the high winds we experience.

Q: Is there a solution to fix the strong winds?

A: No. The Earth has patterns of weather systems. Some of it globally deals with the circulation of the atmosphere, and the fact that the earth rotates. The ground surface is rotating under the atmosphere general drift of air masses. As stated before, in these latitudes the general flow is eastward.

A: For campuses, cities, and towns, the wind can blow trees over or blow branches off trees. If those trees fall on a house or if they fall on a car, they cause damage. People have been killed by trees falling on them in their house or while they’re sitting in their car. I have seen semi trucks blown on their sides in high winds, among other things. These result in financial losses as well as injury issues. But you know, the scarier prospect is that a break in electrical wires produce a sparking wire, starting a fire. Once the fire gets started with high winds it’s really difficult to put the fire out. On a calm day, fire in dry grass burns gradually across the grassy area, which is fairly easily stopped.  However, on a windy day, burning vegetation produces embers which the wind picks up and carries off to other locations.  Even a stretch such as a wide freeway may not be enough of a break to prevent embers from being carried across it and starting a new area on fire.  This spotting issues are a huge hazard. The Cal Fire folks are always on the lookout for that.

Q: Do we humans play a part in all that’s happening?

A: Probably not. I’m saying “probably not” because we are witnessing human-induced climate change. Frankly, the only people who don’t understand that are the politicians who are trying to get elected; they think that they can get elected by sowing doubt. There is no doubt, there is no question, the science is quite clear. Climate change is underway. The climate is changing. Humans are playing a role in how that operates. The climate scientists I have heard indicate that climate change may not make additional hurricanes, for example. Climate change makes some hurricanes worse. It may be that climate change doesn’t make a high wind event, but it may make the wind events worse. Making the link back to exactly how that operates I think would be complicated. However, I have to say that this last month when weather forecasts included gusts up to 80 miles an hour below Cajon Pass, that is the highest wind speed for this area I remember.

Q: Is there a way to predict the next strong winds?

A:  In general yes. How do they do this, I don’t know.  The weather forecasters are good (and getting better) at being able to forecast when wind events will develop, because they are tracking the air masses and pressure differences.

Q: Is there a way to stop strong winds or slow them down?

A: No there’s no way to stop it. Strong winds have been with us forever. These are natural processes, and they will continue to happen.  Will they get stronger? Possibly. This may well be something that can get linked at least statistically to global warming.

Q: How can we use the strong winds to benefit us?

A:  There are wind farms that make use of all that energy. The different styles of turbines are designed for different wind speeds. There are some that are designed to work at higher winds and some that are designed to work at lower winds. Those usually get turned off when the waves get too high because it’ll damage the innards. On the other hand, you want turbines like that because a lot of times the wind isn’t that high, and you’ve got generating capacity on the other hand. Why waste an opportunity? You also have some high wind speed turbines.  That energy that is wind moving seems silly not to harvest. Banning Pass, Tehachapi, and other wind farms are places where there are turbines all over the place. That’s great. In the meantime, then there are also issues of not using it but how live in harmony with it. Set up your yard so the trees are planted on the downwind side of the house, and do not park your car downwind from the tree.