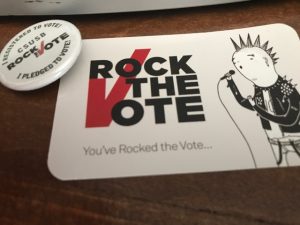 The non-profit organization Rock the Vote hosted the event at the San Manuel Student Union and provided popcorn and cotton candy for students who wanted to watch the film. This was the fifth National Voter’s Registration Day event held here at CSUSB.

Rock the Vote Associate Director, Bryant Fairley, stated that National Voter’s Registration Day is meant to promote recently eligible students to be aware of the importance of registering to vote.

“I think that a lot of young people don’t feel like their voice can be heard,” said Fairley. “But the truth is, if you don’t vote, then someone who is older or further away from the issue or not connected to it at all will decide for your future, and I don’t think that’s right.”

Footloose is a film about a young boy who moves to an old-fashioned town that has outlawed dancing. The protagonist, played by Kevin Bacon, uses his voice to speak out and encourage other young students to follow his lead and protest to abolish this outlandish law.

Rock the Vote chose to show this film in particular because the story of young students rising up and coming together to make a change in their local town promotes students to speak up and register to vote.

CSUSB student, Marissa Setyawan, believes that not enough young people care about voting and if they had voted, then the 2016 presidential election could have had different results.

“I think the people who came out to vote this year were very different than during the Obama administration,” stated Setyawan. “More traditional and conservative votes were made and if students want to see change, then they need to come out and vote.”

The event had a turnout of an estimated 15 students and around 20 students became newly registered voters between both the Palm Desert campus and the San Bernardino campus.

Rock the Vote holds this event each year in hopes that more students will recognize the importance of voting and that participation in National Voter’s Registration Day will increase.

Joselyn Yap, a CSUSB student, stated that it is important for young adults to exercise their rights and make sure to participate in the voting process.

“Exercising your rights is what the United States is all about,” said Yap. “Elections are a historic moment that I want to be a part of.”

The California registration deadline this year is on October 23. Rock the Vote encourages students to participate in local elections coming up in their towns and make their voice heard.

“You really have to stand up for what you believe in, “said Fairley. “Let your voices be heard, and by engaging in the voting process, change will happen.”