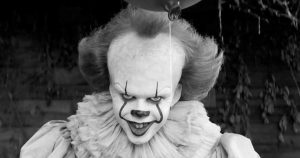 The film It was released to theaters on Sept. 8, just in time for the Halloween season.

The movie is a remake of the original 1990 miniseries that was adapted from the novel of the same name by Stephen King.

The budget for It was $35 million, but it grossed twice as much at the box office. The film made a record breaking $500.7 million worldwide.

The plot revolves around a small town called Derry, Maine where seven young high school outcasts are forced to face their fears when they are targeted by an evil creature.  They decide to join forces to take down a demented and murdering clown that goes by the name of Pennywise.

This group of fearful, yet courageous outcasts is lead by Bill, a young boy whose hopeful search for his brother Georgie, leads him to helps his group of friends to face their fears head-on and take the power from Pennywise.

Bill’s friends Stan, Beverly, Eddie, Ben, Richie and Mike have different personalities, but they all mesh well together.

Ben is new to the school and town and he stays mainly to himself.

Just like everyone that is apart of the group, he is bullied. He is very knowledgeable of the town’s history and the group uses it to their advantage.

Beverly is the only girl in the group and is a social outcast in school because of rumors swirling around about her. She comes from a troubled household and she puts on a brave face like everything is okay when in reality she is hurting and scared for her life.

Richie is the outspoken person of the group who has no filter and says exactly what is on his mind. He likes to be the center of attention and he will keep the audience laughing with his brash humor.

Eddie is the one person out of the group that faced his fear the most in the film.

He is very sheltered and timid due to certain health issues. Throughout the film, the audience will see his progression from being scared to developing his true strength.

Mike is a homeschooled student and outsider from the other side of town. He lost his parents in a tragedy when he was younger and because of that, it made him vulnerable and fearful.

Lastly, Stan comes from a religious background with his father being a Jewish rabbi.

He is not very fond of religion and it is very upsetting to his father. Over the course of the film, he discovers his true self.

This movie will have everyone jumping out of their seats in fear. It is very suspenseful from beginning to end and the scares are on another level.

The film has gotten so much praise as the highest grossing horror film of all time and people are saying that it is better than the original television version.

“In my opinion, I believe that IT was a good movie and much more detailed than the original miniseries and gorier too,” said moviegoer Breanna Ware.

IT was an amazing movie and by looking at the imagery it shows that the creators of the film took their time and made sure that the audience would be terrified.