On Feb. 28, the Pfau Library hosted a screening and discussion of “Killing Us Softly 4”, headed by Dr. Zala Volcic. In this open seminar, students and faculty were invited to join together to view and discuss Jean Kilbourne’s latest installment of her critical lectures exploring the damaging effects of media and advertising on women in American society.

The first half of the seminar involved an introduction to Kilbourne’s latest installment of her documentary series with the most recent one being released in 2010.

After this, Dr. Volcic discussed the film to further immerse the audience in Kilbourne’s lecture. Attendees were invited to analyze sexism, gender violence and sexual objectification of social subjects, particularly women, but not exclusionary of men.

The film provides a critical analysis on how media and advertising are instrumental in the creation and exploitation of image-based insecurities among men and women.

Attendees were given an in-depth lecture on how media creates particular patterns in advertisements to convince female consumers of what it is to be a woman in the U.S.

According to Kilbourne, ”Advertising is quick, cumulative and subconscious” as it subtly creates a social environment where women are rewarded by society to sexualize themselves. The narrative is as disturbing as it is relevant to women in society today and to the students within our community, as we deal with an oversaturation of social media and politics that constantly attempt to mold ideologies within us.

After the film ended, attendees were encouraged to participate in a debate on the documentary itself. 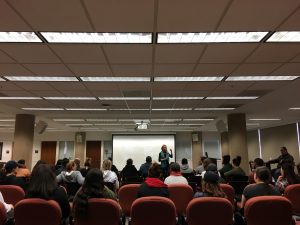 “I think there’s something beautiful about coming together to discuss important issues in an engaging environment. The more interactive we are when we debate together after the video, we learn so much more,” said Dr. Volcic.

Her goal in holding the seminar was to equip the audience with a knowledge of media literacy. This idea stems from the study of media and its cause and effect in the social climate of our global society.

“Media literacy provides this space in the classroom that can promote and encourage students to create and think differently. The research shows it’s never too early [to teach media literacy to students at a young age]. I think it’s crucial to educate children,” said Dr. Volcic.

Dr. Volcic invited the audience to ultimately contribute to the debate of the negative effects of media and advertising in an industry that is profit-based. Many of the attendees cited capitalism and patriarchal values as being contributing factors to the hegemonic views expressed through advertising.

Student Anthony Castellano said, ”I think we do need to work together as men and women. We need more men to understand these issues. What can we do to progress? Are we really understanding the root of the problems?”

Many other students shared similar opinions as they expressed their frustrations on the sexualization of women in advertisements that they viewed in everyday instances and while growing up.

“It was really powerful. The biggest takeaway [from this seminar] was that if we don’t educate ourselves, we can become the victims of the system,” said David Williams, a Communications major. “Media is supposed to be entertainment, it’s not supposed to capitalize on our insecurities to sell and profit off of. It’s not supposed to influence our ideals.”