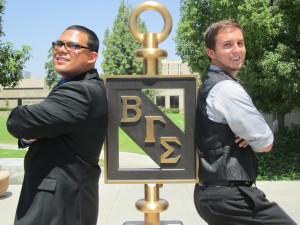 Five years ago during the start of freshman year in high school, Robert Brendza and Jose Navarette never knew they would become finalists for the Spirit of the Entrepreneur Award.

In addition they never expected to develop such a strong, professional relationship with one another.

“We knew each other back in high school, but we weren’t close friends yet,” says Jose Navarette.

“We both played different sports and had different groups of friends. I played basketball, and Jose played football,” replied Robert Brendza.

Brendza will be graduating with a bachelor’s degree in Business Administration with a concentration in Entrepreneurship.

Navarette’s will be graduating with a Bachelor’s degree in Business Administration with a concentraton in Entrepreneurship, Finance and Real Estate.

Phew, that took a a couple long, deep breaths to say.

Brendza and Navarette have become close friends throughout their journey here at the university.

“I dont know how it happened, but our paths just kept crossing” Said Brendza.

He continued “we saw each other more and more, which resulted in learning together and from each other.”

“We both want the same thing: to be successful in serial entrepreneurship,” said Navarette.

Serial Entrepreneurship involves building a business from the ground up, starting from scratch, growing them from nothing, making them public and finally selling them.

“I would say one of the most memorable experiences i have had is competing for the Garner Holt Competition,” said Brendza.

“I was so excited, I couldnt believe it! I bear-hugged Eddy Money when we won, said Brendza.”

“It’s a very competetive enviroment,” replied both Brendza and Navarette.

“Its like going through a type of boot camp together. When all the hard work is done, you come out war heroes.”

Brendza and Navarette both graduated from Cajon High School in San Bernardino.

They pass time remembering their roots and appreciating how far their hard work has gotten them.

“We found success in the hood!” says Brendza.

Both Navarette and Brendza were adamant about including a special thanks.

“We would like to recognize and give a special thanks to those who made us who we are, including, but not limited to, Mike Stull, Dr. Kirwan, Monica Brule, Bill Donohoo and all thos involved in IECE.”

Navarette plans to continue his education and earn his Master’s Degree.

Brendza is currently planning to pursue multple business opportunities while under pressure to conitune his education by his good friend Navarette.