As if no one is watching, a high school freshman stuffs extra lunch portions into his backpack.

The staff of Entrepreneur High School does notice his actions.  The young man explains that the reason he is stealing the food is so he can bring it back home to his little sister so she can have dinner that night.

Rather than punish or scold the kid, the staff member tells him to take more food home with him so he and his sister can eat.

The children at this school are given a full range of support, from three meals a day to after-school programs completely free of charge.

“These are low-income kids coming from traumatic homes and traumatic experiences, so you have to take that and pull them into another way of looking at life,” said Michael Ross, director of strategic partnerships for Entrepreneur High School and one of its founding members. 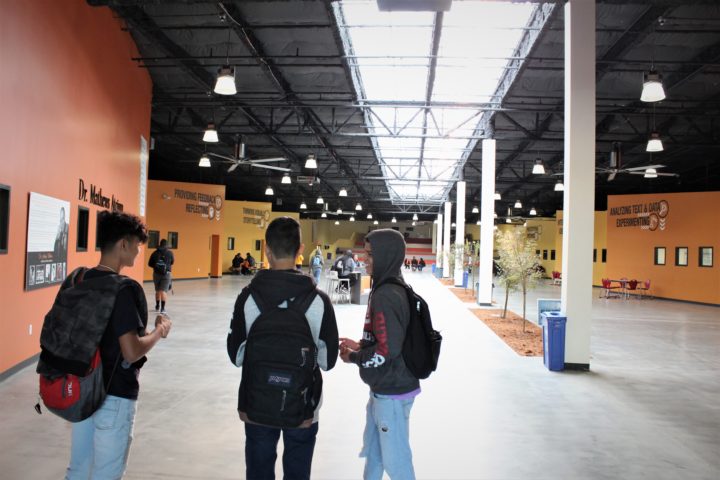 Entrepreneur High School is a brand new public charter school built out of the old K-Mart near the border of San Bernardino and Highland that teaches the regular K-12 curriculum and introduces students to the world of starting their own business.  The school started its first year last August and is currently serving its Freshmen class of 280 students.

“Education plays a huge… You don’t wait until the kids get to college and say okay now, we need to prepare them. You need to start in K-12 to get the kids ready for the next phase of life,” said Monique Carter, economic development coordinator from the San Bernardino Economic Development Agency.

Integrating this approach into education to uplift the talented youth in the San Bernardino area is part of the county’s plan for improving the economic state of San Bernardino, which has already been on the rise according to Carter.

“The San Bernardino County and Riverside County area has the third highest disconnected youth population nationwide,” Jennifer O’Farrell, Executive Director of Big Brothers Big Sisters of the Inland Empire, said. “We have a gigantic youth population that isn’t engaged in the community.”

O’Farrell explained that poverty and a lack of relationships that are not for profit are the major issues affecting the children in our community and leading to them becoming disconnected youth, ages 16 to 25 who are not in school or with employment.

“We’re giving these kids an experience that no other school is giving them by tying them into the local business community and introducing them to the pedagogical approach of entrepreneurship,” Ross said.

Having retired from assistant vice president of the Academic Computing and Media services at CSUSB, Ross got involved in helping build Entrepreneur High School because he saw the need for specialized entrepreneurial education in San Bernardino.  After 27 years of service at CSUSB, Ross felt like he was done with education, but after seeing the plans for the school he was unable to stay retired and joined REAL Journey Academies (the parent company of the school) to establish these types of schools in the area.

Ross was initially resistant to joining the team, but when he saw the demographic that the school was catering too, the support that it was giving the students and the difference in their lives it had to chance to make he got involved.  Ross has been involved in schools in San Bernardino County from his grade school days until his retirement; the area means a lot to him.

What sets the school apart from others is that each child is expected to start their own business by the time they graduate. How many of them have started their own business? Get the numbers. Do they stay or move away?

“I think it [the school] will be a positive impact, it’s really in line with what Cal State San Bernardino is doing,” said Carter of San Bernardino Economic Development Agency.

She expressed how the concept of soft skills has changed from something simple like making phone calls to giving a full presentation, and the school will help these youth learn these valuable new soft skills that are needed in the job market.

“Every child needs a champion, we all needed somebody to cheer us on, to challenge us, to push us forward, we all needed that,” O’Farrell said.  “We need to invest in young people, it’s our responsibility to remind them of the potential that they have.”

Ross says his role in connecting students with local businesses in San Bernardino is particularly close to his heart due to giving them an opportunity they may not have had before and serving a demographic in need of the education and support that the school offers.

“Everybody here cares, from the front office people to the janitors to the security guard to the teachers,” Ross said. “It’s a rough crowd and it’s tiring but we’re changing things for the better.” 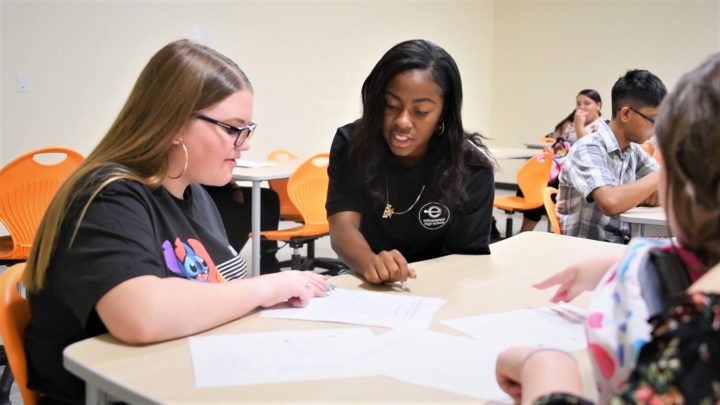 As O’Farrell puts it, even if you help just one person, but then they help another person, and so on, it creates a chain reaction of positivity in the lives of the people here.

“Every little thing helps, and if you can change the culture of these kids to adapt to contributing and being successful as far as the business world and the economy in San Bernardino, then I think it’s a spark that will help the overall picture,” Ross said, “and it’s little sparks like this that are going to make it happen.”