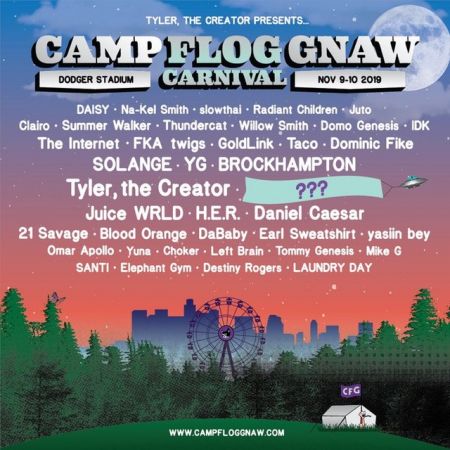 Returning to the Dodger Stadium this year was the eighth year for Tyler, the Creators in the Camp Flog Gnaw Carnival 2019. Presale tickets were sold out back in May way before he released the lineup which was later released in August with a mystery guest as a headliner.

Many festival attendees believed the secret artist was going to be R&B singer Frank Ocean but were quickly disappointed when singer/ hip hop artist Drake was the final closer of the festival weekend.

Drake being one the biggest music artist of the world received a negative uproar from the crowd chanting “WE WANT FRANK!”.

The secret artist was not revealed until the moment of. Tyler came out to greet the crowd and announced he was going to bring out a couple of friends, thus created hope that Frank Ocean would eventually come on to the stage to perform. Both close friends of Tyler’s ASAP Rocky and Lil Uzi were the two rap artists that came out to perform right before the final guest, Drake.

Flog Gnaw attendee Shanelle Versoza stated, “Even for someone who’s enjoyed listening to Drake since his So Far Gone days, I didn’t think he belonged there. It was just mad awkward, and the vibes were all wrong. Me and my friends were pretty close to the stage so a lot of fans around us were die hard Frank fans so not a lot of people were even getting turnt to Drakes old songs.”.

Another attendee Chisom Nzerem voiced, “tbh [to be honest] I wasn’t that mad because I like actually really like Drake but like I wasn’t prepared to see him”.

The demographics of the festival consists of skate culture and individuals who take inspiration from Tyler’s outcast controversial style of hip hop. As of recent years, Drake has become more mainstream which represents pop culture. This consequently conflicts with Tyler’s core audience.

Frank Ocean was associated with the Los Angeles born hip hop group Odd Future lead by Tyler the Creator. Recently the Odd Future favorite dropped new singles right before the festival. This led to the belief that Frank Ocean was this secret headliner.

“It seemed like it wasn’t a coincidence since the man [Frank Ocean] doesn’t bless us with music too often but when he does you know something big is dropping.” Versoza.

Ocean has never performed at Flog Gnaw before and this being the eighth year for the festival, it would have been a nice surprise for his fans. Throughout the years, previous headliners were Pharrell Williams, ASAP Rocky, Lil Wayne, Lauryn Hill, Kids See Ghost and the creator of the festival himself Tyler the Creator.