Fans that went to Homecoming bash 2019 were treated to a free game and see the  #1 ranked Women’s Volleyball team in Division II, and they were not disappointed. The Coyotes won their annual homecoming game 3-0 in a contest against Cal Poly Pomona, a school that never challenged the Coyotes before. Homecoming allows alumni to stay in touch with the university and watch the dominant Coyotes. The program that has dominated the California Collegiate Athletic Association (CCAA)  in recent years winning 3 straight championships and looking to win a 4th.

This was nothing new for the program as they were ranked #2 entering the season and quickly captured the #1 ranking after beating several ranked opponents.

“It’s a good thing we are used to being a ranked team because it can be a distraction,” said Head Coach Kim Cherniss.

The Coyotes are not new to success under Cherniss as they have won 14 CCAA championships since 2001. The Coyotes continue to reload each and every year and strive to bring the program to new heights.

The Coyotes have become the premier program on the west coast for Division II. It was only fitting that the Coyotes dominated on the night Samantha Middleborn was elected into the CCAA Hall of Fame. The former 2 time National Player of the year went into the Hall of Fame with a large Homecoming crowd cheering her on.

Honoring Middleborn with a tribute video during Homecoming brought back memories to the alumni that were there during her time as a Coyote.

With renovations of the Coussoulis Arena finished an estimated 1,200 fans were in attendance to bring a big game atmosphere to Homecoming 2019.

“That is why our team puts on the CSUSB uniforms to play in front of a big crowd like tonight, it means a lot to have the students support the team,” said Cherniss.

“The crowd was great tonight, I believe it was the biggest crowd in my three years here,” said Cardoza.

Cardoza who is already a member of the 1,000 kill club as a junior is continuing to add to her illustrious career. Cardoza is already in the top 10 for most kills in her career and currently leads the conference in kills per set at 4.46.

The Coyote’s 3-0 win was the 12th time this season the Coyotes have not conceded a set to their opponent. Since the team is #1 and undefeated they usually get their opponents’ best shot. 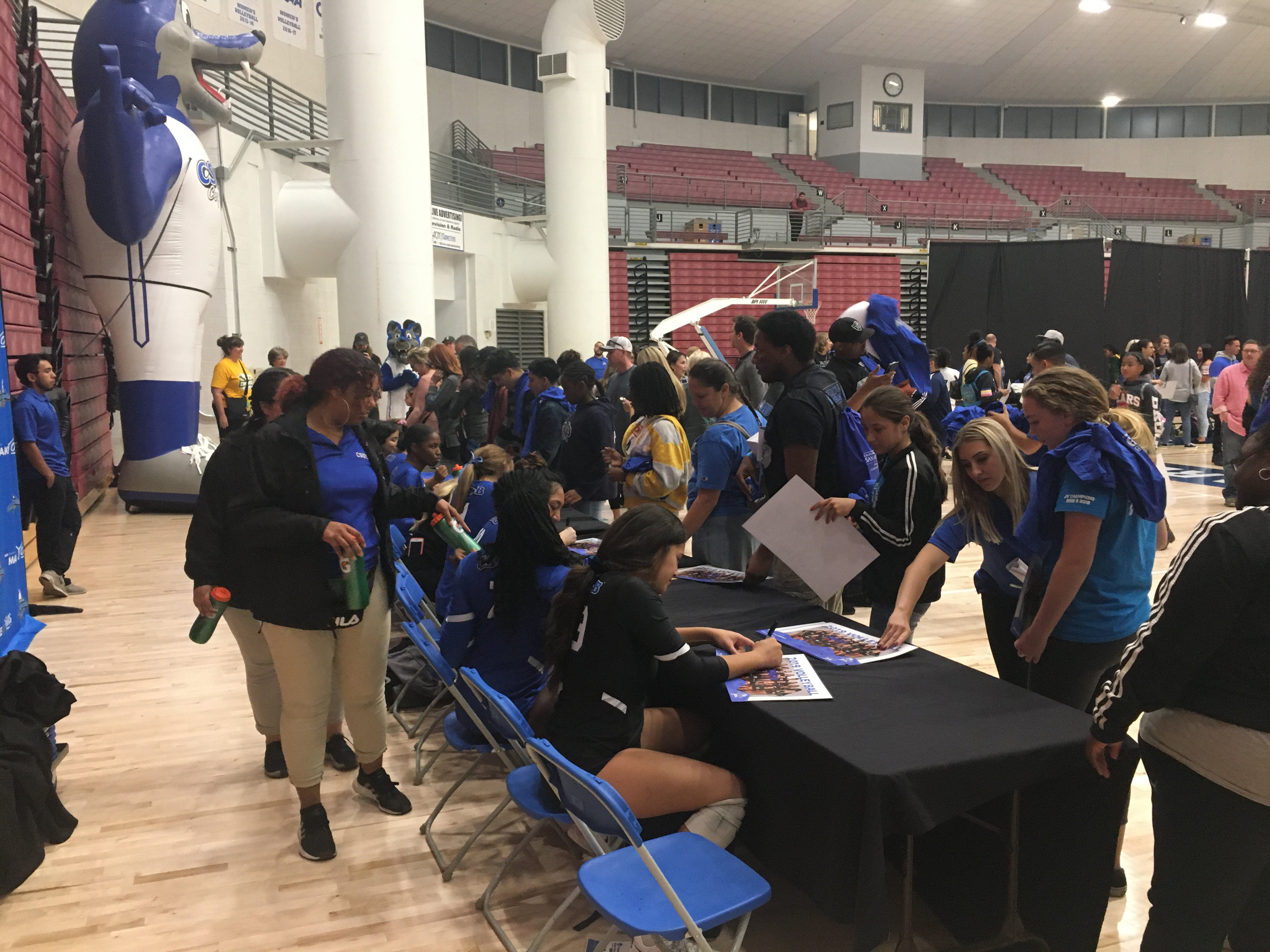 “It’s motivating to us and pushes us to work hard every day. We have goals as a team but we just want to continue to get better,” Cardoza said about the #1 ranking.

The Coyotes are currently 17-0 and the goals are the highest they have been for the program.

“It is definitely a goal [To win the National Championship], a lofty goal, but reasonable given the talent we have here,” Cherniss said.

The Coyotes are having all this success this season even though they graduated their top setter. This year the Coyotes are rotating Freshmen Marlee Nunley and Mehana Ma’a, who have filled in fantastically.

“They are doing amazing considering their youth, it’s a difficult position, it’s like having a freshman quarterback out there,” said Cherniss.

The program has achieved second place in the National Championship but has never won, which gives the already elite program more motivation. The Coyotes who are currently #1 in the CCAA and the nation, play at home next on November 8.