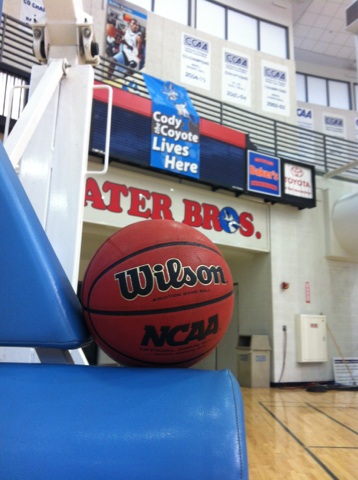 The Yotes were dealt a tough hand as the Tritons have been one of the most notable teams this past season with an overall record of 20-10.

Adriana Brodie pulled off the game high 14 points while Trinidee Trice trailed behind with 12.

Senior Eliza Dy finished out her career here at CSUSB with 10 total points.

She was also named All-CCAA second-team women’s basketball honors squad by the conference on the morning before the San Diego loss.

Since her return to play this last season, she has scored in the double figures 12 times and remained a solid asset to the team as a leader and driving force for CSUSB.

The Yotes went into the CCAA tournament after a solid win on Fri., March 1 against the Sonoma State Seawolves to end the regular season play.

Even with the lead changing eight times throughout the duration of play, the women’s basketball team was able to pull through with a 59-41 win.

“We knew we needed to win in order to ensure a better seed, so we did just that, and pulled it together as a team,” said Huffman.

On senior night for the Yotes, the key players came through to bring in the win.

Brodie continues to be a force on the court, scoring a double double with 13 total points and 13 rebounds.

Dy followed closely behind with 12 total points and Jaslyn Cosey with 11.

This win signified a spot in the CCAA tournament and gave the Coyotes the seventh seed.

It was a positive close out to the season for the women and motivated them for the game that followed on Tuesday.

Although the women were unable to make it past the first game in the tournament, it foreshadowed what is to come for next seasons line up.

If Brodie continues to play the way she closed out the season, next season will be successful.

Assistant coach Monique Nolan noted that the team finished out the season strong.

“We were on fire in February. We improved tremendously in the latter half of the season which was shown by the teams execution in games where we had previously lost. That only shows that the team has the potential to play on a better level,” said Nolan.

“We struggle on the road and San Diego is in the top of our conference, so our CCAA loss on Tuesday was tough, but I’m proud of the way we finished,” continued Nolan.

The season is finished for the Coyotes but if the team continues to improve throughout the duration of the break, the fans will then see a whole new different record and season.