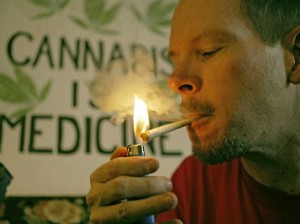 Gov. Jerry Brown should reconsider his stance on the recreational use of marijuana in California and watch how Colorado and Washington have adapted to the newly legalized drug.

The Huffington Post has reported that Gov. Brown said legalizing the drug would not be a good idea.

“A certain amount is okay, but there is a tendency to go to extremes,” said Brown. “The world is pretty dangerous and competitive, I think we need to stay alert.”

While our state grants us the ability to get a medical marijuana card, Brown’s statements question if adults know how to limit themselves.

Proposition 215 made medical marijuana legal with a doctor’s consent for people over the age of 18.

The idea that marijuana use is becoming widespread seems to be causing people to lose their ability of awareness.

However, this seems to be being put to rest by officials that are seeing the effects of its legalization.

Colorado and Washington voted to make marijuana use legal in their states for people 21 or older.

Capt. Taylor Kotter of the Utah Department of Public Safety told USA Today, “We haven’t seen any trends yet.”

Some people believe that if recreational use of marijuana was legalized it would not have a direct effect on non users it would only give the state something new to tax.

Student Cameron Alvarez said, “I wouldn’t care because I feel like another person’s choice to smoke pot wouldn’t affect me much. I would be for them legalizing it because the state can tax it.”

Marijuana has not corrupted society in these two states because institutions are regulating it on their own.

Colleges in Colorado have banned the use of the drug from their campuses so that they can continue to receive federal funding.

Will Jones, external communications manager at the University of Denver said, “Even with the passage of Amendment 64, marijuana is prohibited from campus and will continue to be prohibited.”

Rules regulating marijuana on college campuses and workplaces are straightforward in that students and employees will be expelled or fired if they are caught using marijuana on school property.

Naturally there will be those that will bend and test the limits of the rules against the drug, much like students drinking in their dorm rooms on a dry campus.

People that do not engage in the drug have shown that the decisions of others do not have an affect them.

CSUSB Student Josh Thompson said, “I don’t smoke, but it doesn’t bother me what other people choose to do.”

Governments should realize that people are more than capable of being responsible for themselves and don’t need extra laws to keep people from getting what they want.

The push against the recreational use of marijuana comes down to the recognition that people can be responsible for themselves.

The government’s opinions on whether or not marijuana is safe for citizens shouldn’t matter because voters have proven that they are ready for marijuana to be easily accessible.