26 people were killed by a single gunman at a church in Sutherland Springs, Texas on Sunday.

Over 20 others were injured. The ages of the victims ranged from 18 months to 77 years with about half of them being children.

One family lost eight relatives from three generations including a one-year-old child. The pastor’s 14-year-old daughter was killed as well.

“We are dealing with the largest mass shooting in our state’s history,” said Governor Greg Abbott.

The gunman has been identified as 26-year-old Devin Kelley. His motive has not been confirmed, however there is evidence that it was a result from a domestic dispute with his mother-in-law whose family regularly attends the church. The family was not there at the time of the attack.

The massacre was cut short due to a local citizen who heard the gunfire, grabbed his rifle and opened fire on Kelley, hitting him at least once.

Kelley then dropped his assault rifle and attempted to flee the scene in his vehicle. However, another citizen chased after Kelley into the next county where Kelley crashed his car and was found dead with the reason for death not yet determined.

It is possible the death toll could have been much higher if it was not for the neighbors who responded. The shooter had multiple weapons in his vehicle which leads to the theory that he had plans to continue his rampage.

The attack leaves an interesting argument involving gun control as Kelley failed to obtain a fire arm twice due to issues with his background check. The third time he left certain areas blank on the application and received clearance to get his weapon, which shows a clear issue with gun control laws.

However, the neighbor who engaged Kelley was able to end the massacre due to his right to own a rifle.

“This act of evil occurred as the victims and their families were in their place of sacred worship,” said President Trump. “We cannot put into words the pain and grief we all feel and we cannot begin to imagine the suffering of those who lost the ones they love.”

Trump has been regularly communicating with city officials and Governor Abbott while he is currently in Japan. 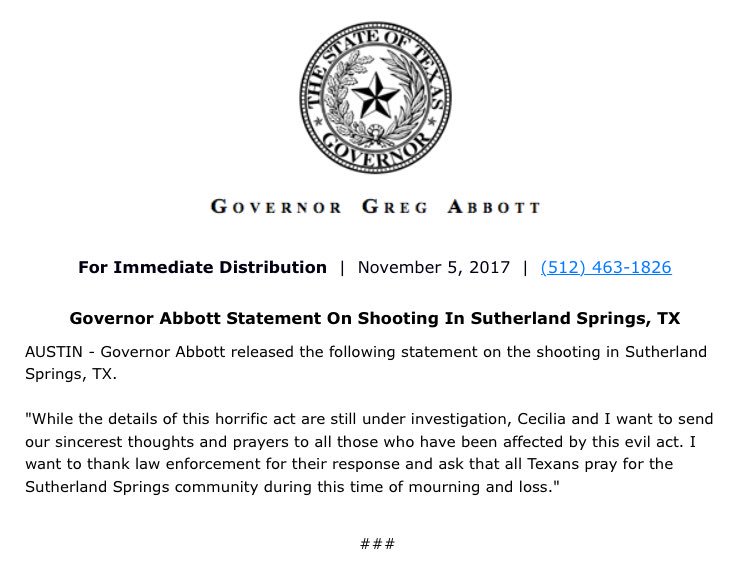