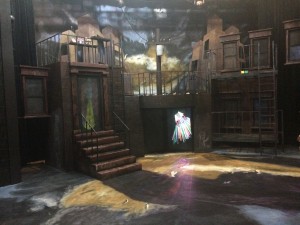 This whole play is a student assemble piece, even the set design was designed students that attend the college.

Kevin Ezeh, a CSUSB alumni wrote this play, and collaborated with the director Kathryn Ervin about his ideas.

Ervin, the director, expressed her views about what this production is about and what the audience can expect.

“This production began as an exploration of two novels whose central character was ‘an invisible man.’ H.G. Wells’ science fiction tale is about power and vulnerability and Ralph Ellison’s social novel is about how society makes and marks us. Into this mix we added a homeless character perhaps the most invisible of all,” said Ervin.

“The process has given us a great opportunity to think about perceptions and ways of seeing. We invite you to consider the question of invisibility and the power and pain of living in such a state,” continued Ervin.

She then expressed her feelings about what she wants the audience to take from watching this piece, which is to have a social responsibility for what’s around us.

The ending of this piece will show how these two stories come together to tell the audience what being invisible is.

The audience even has a chance to give feedback about how they felt about watching Invisible.

All of the main actors are amped with excitement for their role in this moving play.
Harim Sanchez, who plays Wells, can’t wait for opening night, but also deals with challenges with such a complex character.

He prepared for this role by reading the two novels, and even isolating himself to see how it would feel to be invisible for a day.

“One challenge that I’ve faced in being a part of Invisible was having the audience have empathy for Wells,” said Sanchez.

Overall, Sanchez is more than thrilled to see the reactions from the audience as well as his fellow students.
Student Ernie Arvizu, can’t wait to see the upcoming play.

“From seeing other performances I expect to see something off the charts, and that keeps me entertained from the beginning until the end,” said Arvizu.

Tickets will be sold for $6 student price, $15 for adult or $12 at the box office or at theater.csusb.edu.