As the fall quarter gets busier, the struggle to find parking is at its peak. Campus officials have plans for helping students find parking with the help of new software.

Savanna Trombetta, a senior at CSUSB who works two campus jobs, said that finding parking has always been difficult for her, even when she lived in student housing.

“I think we can handle the mass number of students here but just not in parking terms because we’re such a heavy commuter campus. I think that the commuter aspect is really negatively impacted the way our parking services work,” said Savanna Trombetta, who is hopeful for the possible parking solution.

CSUSB Assistant Professor for Computer Science and Engineering Yunfei Hou, Ph.D. has been working with ITS Director of Digital Transformation, Michael Casadonte, to provide a parking monitoring app that will tell students where parking is available.

Their tentative plan is to release the app once both parking structures are up and running, which they say should be in the next 18 months. Students will be able to look at the myCoyote app before they get to campus or once they arrive on campus and see where available parking is located. This is intended to reduce the time spent searching for parking.

“Our objective is just to count how many cars are coming in and coming out of Parking Structure East so we can then tell you how many spots are available,” said Dr. Hou.

Hou explained that the parking monitoring system originally began last year as a project that three of his students had been working on as part of the Engineering Design course series. It then turned into a collaboration between Academic Technologies & Innovation, facilities service, and parking service as well as the university police department who provided 13 cameras for Parking Structure East.

Parking Services officials have been contacted for several stories about campus parking, including this story, but have not responded.

Samantha Noriega, a student staff member who works at the front desk of the Parking Services, said she gets a lot of complaints about parking. Despite the complaints, no plans to improve parking have been officially announced. 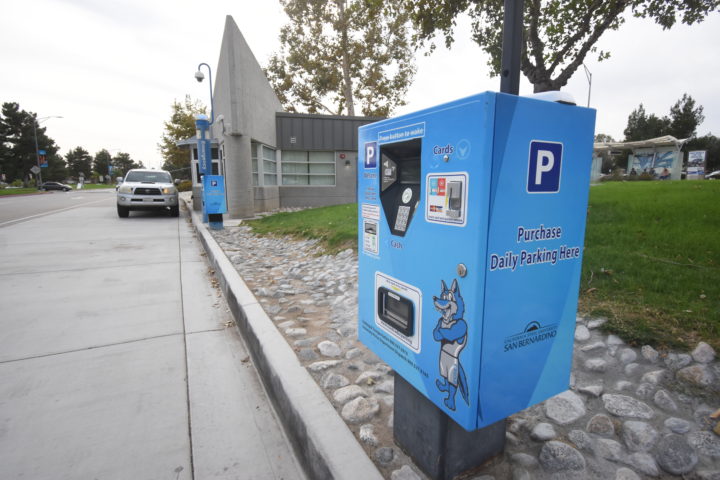 Students are expressing that finding parking near their classrooms has always been a struggle.

As shown in the fact book, the student body has only grown over the years, but parking has remained unchanged. The campus has roughly 6,000 available parking spaces. This number does not account for accessible parking spots, staff parking, carpool parking, or residential parking.

John Hansen, another CSUSB student who transferred from Riverside Community College (RCC), shared his experience with parking on campus. He explained that one of his biggest frustrations is that CSUSB, unlike RCC, has no ticketing grace period at the beginning of their quarters.

“I know those in charge of parking don’t understand the frustrations,” Hansen stated. “I brought my frustrations to them and they were like, ‘sorry, but no.’”

Another frustration is the cost of parking citations, even though parking passes per quarter went from $102 in 2016 to $114 in fall 2019.

“I would happily go give my two bits. I’ve had two tickets that’s $108. I have a child at home, a wife, payments, and I’m putting money into the school,” Hansen said.

Noriega admits she never thought there would be so many details that go into the work of parking services before she started working there.

For example, she explained that parking services is self-funded by the revenue generated from parking passes and parking citations.

Michael Casadonte, who was collaborating with Dr. Hou, has been in contact with Parking Director Munyiri while working on an interface for the myCoyote app, designed to monitor the level of available parking spaces.

“Parking services’ perspective is, ‘well, there is available parking somewhere on campus it’s only a matter of finding it.’ In fact, Grace just told me the other day she had people in parking literally park somewhere and walk somewhere else to determine the amount of time it took to park,” shared Casadonte.

The point of the exercise was to show that any parking space is within reasonable walking distance from any location on campus.

Casadonte’s project is based on the parking space monitoring system that Hou and some of his students installed over the summer. It launched on September 7 in CSUSB Parking Structure East and calculated 19 cars at the busiest hour that Saturday.

Casadonte’s system is designed to show the number of available parking spots in any given parking lot or structure. Casadonte has already finished the app, now he is waiting for monitoring to be set up in additional lot and structures before officially launching it.

Casadonte explained that his app works by retrieving the information from Dr. Hou’s equipment.

As of now, Parking Structure East is the only structure that has monitoring equipment, according to Hou.

“We are looking at this project to expand it to Parking Structure West. And we are looking to do so in the coming two or three quarters,” said Dr. Hou.

Parking structures East and West each have 745 parking spaces.

“That’d be awesome! I think that would greatly, at least determine some factors before students even come to school. If you have a class at 12:00 you can check it at 10:00 so you can kind of estimate,” Trombetta expressed.

Being a senior, Trombetta will no longer be a student at CSUSB when Dr. Hou and Casadonte plan to launch the app next year.

“That would be great, I think, if students can really work around the situation and it not be such a last-minute thing,” explained Trombetta.