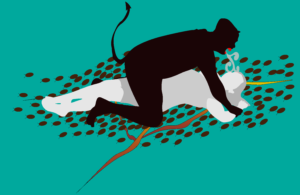 After Joshua Jennifer Espinoza’s “A Guide to Reading Trans Literature”

picture you were under my clothes

Philippines is the phantom,

It trembles at times, too.

some aboard pieces of ripped cardboard boxes        float…

We felt the motion as our bodies were forcefully swayed back and forth, side to side. We felt light on our feet despite putting pressure on our bodies to try to have control over it. Keep our balance. Prevent ourselves from falling. We close our eyes. Open our eyes!

cause I try to heal

I’ll always have to feel

To my half-sister I’ve never spoken to

she lives with It

she was four, Dad said.

He knew her It, but not my It.

cause I don’t know how