On March 16, the San Manuel Amphitheater will be transformed into a fantasy world filled with eclectic visuals, live dance music and most importantly an electric crowd of thousands for Insomniac’s Beyond Wonderland Festival. 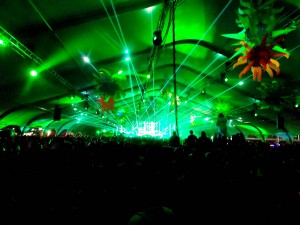 The annual electronic dance music event has been held in San Bernardino since 2010 and with Insomniac’s reputation for throwing massively popular parties like EDC (Electronic Daisy Carnival), Beyond Wonderland is panning out to be nothing short of spectacular this year.

Along with the huge array of fantasy characters, props, dancers, and entertainers, the Insomniac crew spends thousands, if not millions of dollars on stage production, lighting and fireworks for each stage alone.

The festival will also contain five separate stages of entertainment with talented DJs and Producers from all over the world performing.

The main stage, known as “Queens Domain,” will be sure to provide some booming sounds with talented DJs such as David Guetta, Steve Angello of Swedish House Mafia and one of my favorites, tech house master Trent Cantrelle headlining the bill.

In the “Madhatter’s Castle” stage, Dutch heavyweight DJs, Afrojack, Dash Berlin and W&W, which currently possess two slots on the Top 10 chart by Beatport.com will be performing their beats of electro, Dutch, progressive and trance house respectively.

The three remaining stages bring a different side of the electronic dance music scene, and provide a more underground environment for the real bass heads.

The “Chess Village” stage will be delivering some big bass with dubstep DJ’s, Delta Heavy and Texas DJ Crizzly closing out the night.

For those drum & bass heads, Welsh legend High Contrast will also be dropping a set that night on the “Chess Village” stage along with Culture Shock, Ed Rush & Optical, State of Mind, Fury and other great acts.

The “Cheshire Woods” stage will be lit up by Canadian DJ Art Department, as well as Spanish DJ Maceo Plex, who will be bringing some electronic gold to the decks with Maya Jane Coles, Sub-Ann and Frencesco Lombardo sharing the stage as well.

The most intriguing stage appears to be the “Discovery Project” stage which will feature up and coming DJ/Producers that have been selected as the elite artists from an ongoing competition known as “The Discovery Project.”

In this competition which is open to the public, electronic dance music artists can submit a short mix along with a self-produced remix of a record which has been pre-selected by Insomniac.

The winners of the competition get the opportunity to perform on the “Discovery Project” stage at Beyond Wonderland.

This will be the first time the event comes to the San Manuel Amphitheater in Devore. In previous years it was held at The National Orange Show fair grounds, but it has been moved due to the fact that the venue got numerous neighbor complaints about the noise.

Beyond Wonderland is sure to be loud. In fact, it will be raging.

The speakers might just blow your face off, but that’s not necessarily a bad thing.